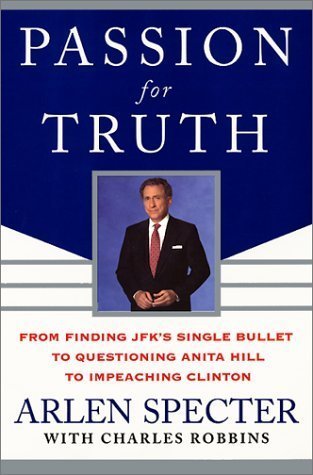 Imbued with rugged individualism and fierce independence from his youth on the Kansas plains, Arlen Specter became a renowned big-city prosecutor and then a respected, powerful U.S. senator.

His remarkable forty-year career has encompassed such milestones as originating the Single-Bullet Theory for the Warren Commission; derailing Judge Robert Bork’s Supreme Court nomination; interrogating Anita Hill, and playing an important role in President Clinton’s impeachment proceedings.
In this brutally honest book, written with Charles Robbins, Sen. Specter analyzes these and other controversies, assessing each through both a legal and an historical lens. Throughout, he tells the truth, naming names, identifying where the system worked and where it failed – and even admits to his own mistakes. This illuminating memoir is vintage Specter: thoughtful, provocative, and deeply informative.

In this brilliant political masterpiece, Arlen Specter brings a host of watershed events to life, taking the reader into the courtroom, the cloakroom and the Senate chamber, and offers a clear and honest vision for reforming the way Main Street and Wall Street are governed.