An eager politico finds himself on the rise only to discover the perilous costs of success.

When Henry Hatten wangles a job as communications director for Nebraska Senator Tom Peele’s presidential campaign, he breathes a huge sigh of relief. Smarting over a recent gubernatorial campaign in which his pulling a political punch may have cost his boss the race, he’s thrilled to be back in action.

This time around, Henry is determined to shuck his ethical qualms. But he soon finds he’s facing more than he imagined. The new gig turns out to be rife with scandal and corruption— just the kind of politics Henry so fervently sought to banish. Events go from bad to worse as the depths of greed emerge, tracking the acceleration and excitement in the campaign itself. Led by a ruthless chairman and filled with warring aides, hired thugs, fractious union bosses, and snooping reporters, the Peele campaign is shaping up to be quite the circus. And that’s before Henry’s ex arrives on the scene . . .

But when someone close to the campaign is murdered, Henry can no longer turn a blind eye. As he conducts his own covert investigation, still more secrets emerge. So deeply entrenched in the politics and manipulation, Henry must face a staggering reality in which his values are no longer his own. But can he extricate himself and salvage the career he loves? And can he do so with his soul intact? A brilliantly plotted and characterized political novel, The Accomplice takes readers into the guts of a brutal presidential campaign.

“. . . A riveting look at how love, lust, and murder can derail a presidential campaign. . . In the current campaign season, this thriller is a must read.”
-- Publishers Weekly (Starred, Boxed Review)

“Robbins . . . deftly combines a lively insider's look at campaign politics with a satirically spiked murder story. . . Robbins stocks his impressive first novel with great characters . . . The narrative flows freely and easily, the dialogue crackles, and the comedy comfortably coexists with the drama. Perfectly timed for the 2012 election, this book sets itself apart from most political thrillers with equal parts insight and imagination.”
-- Kirkus Reviews

". . . This is a political thriller in the truest sense, a behind-the-scenes look at the America we have become. Not since “Primary Colors” have I had so much fun reading a politically based novel. Written in fast-flowing detail that only a Washington insider could provide, this is a tour de force of characters and plotting, choices and decisions.
I was immediately lost in the world and found it easily accessible because of the way it was written. . . This is one of those must-read books. Even after this current election, this is a timeless American novel that should be a part of every library collection and should be read at least once every four years. Charles Robbins is definitely an author to watch."
– Clay Stafford, Founder of Killer Nashville

". . . Timely with condemnation, the Accomplice is a delightful political thriller that enables the audience to observe what goes on behind the curtain on a major run for the White House. Ethical politician seems like an oxymoron as even knowing to keep oneself clean fails to prevent scandalous, illegal and in this case murderous behavior from happening. Purist Henry is superb as a sort of Forty Year Old Virgin surrounded by hedonist devils who ask not what they can do for their country - ask what their country can do for them."
-- The Mystery Gazette (Harriet Klausner)

". . . Robbins gets the details right, from the heat of an Iowa summer to the toll of too many bad meals consumed while on the road. This slick political novel seems perfectly timed to draw a crowd during the election cycle."
-- Booklist

"Had enough of the current political posturing? Then grab a copy of this intelligent debut novel by a former journalist familiar with the sordid Washington underbelly. . . "
-- Monsters and Critics

"When it comes to the muck of political campaigns, nothing beats actual life. 'The Accomplice' however, gives reality a run for its fundraising, back-biting, corrupted, and murderous money."
-- Suspense Magazine 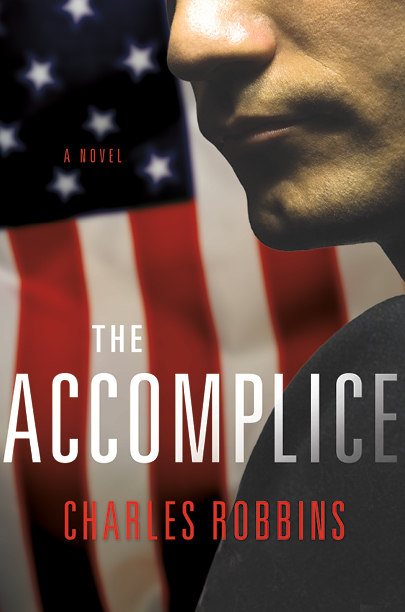